Galapagos, Ecuador, June 30, 2003 — Day 23 was the start of one of the year’s highlights: our week touring the Galapagos Islands.  We were thrifty travelers for the whole year, and this was quite a splurge.  But it was considerably more reasonable than it would have been had we booked from home, since we were able to get a discount rate by shopping around in Quito.  Galapagos is part of Ecuador, but 500 miles west from the mainland.  So we flew to Isla San Cristobal, and then continued by boat for the entire tour (our boat — a catamaran called the Archipell — was on the small size with only about 10 other tourists plus a guide and crew; some others are cruise ship sized).  Every day we made several landfalls on different islands of the archipelago, plus we often took snorkeling and kayaking breaks.  Our first hike on day 1 was practically teeming with sea lions, including a few brand new pups, as you can see pictured here.

Quito, Ecuador, June 29, 2003 — Today pictures of the day are a little different since they (a) are by Sherri, not me, and (b) are of me.  June 29, 2003, was our last day in Quito, before we headed off to Galapagos.  We spent the day doing errands and preparing for the next step in our adventure, plus we saw Matrix Reloaded (Matrix Recargado) at the local mall.  One of those errands was getting my head shaven for the first time ever.  It wasn’t easy explaining to the barber in my broken Spanish, so I ended with just a short buzz.  But Sherri helped me finish the task with a razor.  I’ve shaved it multiple times since then, but back then it felt pretty bad-ass.

Quito, Ecuador, June 28, 2003 — Day 21 was our first full day on our own, having left behind Rosa’s comfy home in the hills of Quito.  Spanish classes were over, and we were truly about to start our round-the-world backpacking adventure.  But it started with a little jolt of reality as we awoke to some commotion outside our hotel window.  A homeless family (or two) was encamped on the street below us, reminding me that Rosa’s suburban style home in the hills was not the norm.

As an aside, this photo demonstrates once again one of the ways my photography has changed thanks to digital cameras.  I shot this frame with my first digital camera just a few weeks after buying it.  And clearly I still had the habits I’d acquired from shooting film for many years.  I look at this shot now and wish I had shot many more, but that day I shot just one single frame.  Now I shoot multiple frames a second quite often.  Memory cards were still very expensive back then and we didn’t have a lot of extra storage space on the laptop we were carrying with us, so being conservative with the number of pictures I took was perfectly reasonable.  But I surely could have afforded to have taken a few more shots. 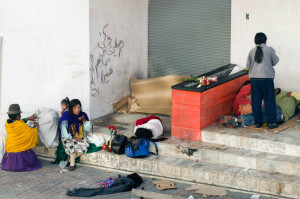 Quito, Ecuador, June 27, 2003 –I don’t remember much at all about Day 20 of our trip.  School and our stay at Rosa’s was wrapping up, and we took a public bus somewhere.  I know that because I snapped a picture of the space on the bus where there was supposed to be a TV, but instead there was a picture of Jesus and two stickers of Bart Simpson.  Apparently the bus operators know something I don’t know. 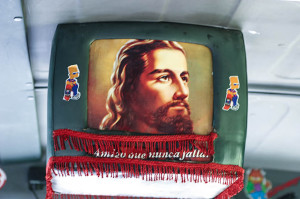 Mitad del Mundo, Ecuador, June 26, 2003 –Day 19 was spent with our new friends Barry and Renee traveling to the center of the earth: Ciudad Mitad del Mundo is an hour bus ride out of Quito and is located on the equator (actually near, it turns out — so says the NY Times and Huff Post).  Regardless of whether it’s the real equator, it has an interesting museum about the indigenous people of Ecuador, plus we had fun and got gorgeous views of the volcano Cotopaxi.

Photos of Brett & Sherri by Barry Doodeman (though using my equipment and I imagined and set up the photos, so I’m OK with putting them on my photo blog).

Quito, Ecuador, June 25, 2003 –When you’re traveling for an entire year, not much happens on some days.  Day 18 was one of those days.  The photographic highlight (and I use that term very loosely) occurred at our Spanish language school in Quito, when our language instructors decided to teach us salsa dancing.  When you think of Ecuador, salsa dancing does not immediately leap to mind, and these language instructors didn’t exactly make you think of dancing either.  But it was fun, and this snapshot makes me chuckle (though I’m fairly confident that my time would have been better spent learning the past tense). 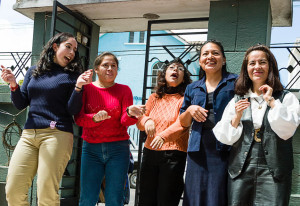 Quito, Ecuador, June 24, 2003 — While in Quito, we stayed in a fairly posh little neighborhood in the hills above town, and walked down every day to get to our Spanish language classes.  This picture was taken from the top of the stairs near the beginning of our walk (and their were many more stairs and roads down after this one).  Quito is over 9,000 feet above sea level, so the walk home was considerably more tiring than the walk to school, as I’m sure you can imagine. 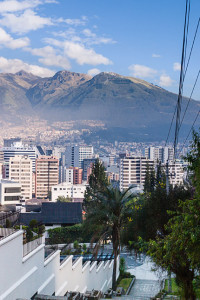 Baños, Ecuador, June 23, 2003 — Another rainy day stymied my attempts at photography on our last morning in Banos.  I probably could have gotten some nice shots if I was willing to brave the elements, since there was a great fog hanging over the city.  But I wasn’t equipped to protect my camera gear, so I took a few shots from the door of the restaurant where we grabbed breakfast before jumping on the bus back to Quito.  At least breakfast was easy to order (in practically any language).

Baños, Ecuador, June 22, 2003 — Once again, I look back at the pictures from Day 15 and am disappointed.  The good news is I know that my skills improved vastly over the year of travel, so if you stick with me the pictures will get better — I swear!  The other thing which I remember as I think back to 10 years ago is that I was nervous having my camera equipment out in plain view.  I got over that nervousness to a large extent over the year, but back then a digital SLR was almost unheard of.  When my camera was out, locals and fellow travelers alike would constantly ask me questions and stare at my outlandish digital camera and giant L-series lenses (when I told them it was a 6 megapixel camera, people’s jaws would drop with envy and surprise).   So my camera often stayed in my bag until I was ready to shoot, and then it would quickly return to the secrecy of my backpack.

Anyhow, we spent Day 15 of our trip riding rented bikes in the Andean hills outside of Baños with our Dutch friends Barry and Renee from our Spanish school.  Although we haven’t seen Barry and Renee in many years, they remain friends — one of the wonderful side effects of traveling.  It was a beautiful ride past cascading water falls, little villages, and farms, but I didn’t capture most of that since it’s tough to photograph and ride at the same time, so you’ll have to trust me.  We ended with a little hike and then hitched a ride in a pickup truck back to town.

As a side note, the night before ended with a valiant but unsuccessful attempt at nighttime photography of an active volcano.  During the year, we had many failed attempts at seeing/climbing/photographing/skiing/etc. volcanoes, and this was the first.  After taking a 20-minute bus ride outside of town in the middle of the night, we spent about two hours staring into the blackness of what we were told was the cloud-covered volcano Tungurahura.  We just think we were taken (literally and figuratively) for a ride.

Baños, Ecuador, June 21, 2003 — Wed did a lot of hiking during our round the world adventure, but rarely did I do it with specific photographic goals.  As a result, we often hiked when the light was not at its best.  Such was the case on Day 14, when we hiked above Baños.  I like the portraits I got that day of my beautiful, young bride (we had just been married 5 weeks then).  The landscapes….well they were more descriptive than beautiful.