The Manu Biosphere, Peru, August 8, 2003 — Our final day in the jungle was spent much like the others, cruising slowly down the river and walking on the shores. The highlight was a great view of a giant river otter swimming in Lake Otorongo.

The Manu Biosphere, Peru, August 7, 2003 — We spent Day 61 was much like the previous day, lolling around the river, where we saw lots of monkeys (from afar) as well as tons of birdlife.  We got a great view of a very peppy cayman as well.  After an afternoon hike in the jungle, the sky turned to silver and a troupe of monkeys passed over our camp, hanging out for a while overhead.

The Manu Biosphere, Peru, August 6, 2003 — We spent the two-month-mark of our trip around once again on the river.  I guess it was tough to keep the food purified, because I was still battling sickness when Sherri got sick as well.  But it wasn’t too bad, so we were able to enjoy the ride down (up?) the river, seeing monkeys and cayman along the way.  We also hung out for quite a while in a blind watching a salt lick favored by macaws, though mostly we saw small green parrots.  The night ended with a catamaran ride on a lake to see the sunset over Manu.

The Manu Biosphere, Peru, August 5, 2003 — I spent the beginning of Day 59 a little green around the gills (something I ate or drank made me sick overnight).  But we were still up at 5:30 in the morning, ready to …. well it was never really clear what we were going to do each day.  We just followed along and did what we were told.  In this case, our little group of 4 Israelis, 4 Italians, our guide, and a captain, assistant and cook, all piled onto a barge and started down the Manu river.  It was a long day on the river, and definitely not a zoo (we saw jungle animals along the way, but they were mostly far away on shore, not close up and posing for pictures).  But it was enjoyable and relaxing and mostly interesting.  The day ended with a campfire dinner, and a bath in the river.  Not too bad.

The Manu Biosphere, Peru, August 4, 2003 — We were up early to view the Peruvian national bird, which we were told was the cock of the rock, but at 5 a.m., it was hard to see anything, much less a bird.  Then we were off for what we thought was a hike, but turned out to be a leisurely raft tour of the jungle (mixed in with the occasional class 3 rapid).  When we get to our lodge camp, we met our guide Oliver, an Italian who has lived in the jungle for 15 years and is basically Tarzan.  The camera stayed in the dry bag much of the day, but I did manage a few photos along the way.

On the Road to Manu, Peru, August 3, 2003 — We spent the entire day day (and into the night) in our “specialized overland vehicle” (a/k/a city bus) on the way to the Manu Biosphere Reserve, a Peruvian National Park, World Heritage Site and very cool jungle.  We white-knuckled it the whole way, hoping we wouldn’t plummet 8000 feet to our death along the mountain roads, and fortunately we arrived safely.  Along the way, we stop at “bread town” (smells great), “brick town” (doesn’t smell so great), and the tombs (chullpas) at Dinamarca.  They are tall, stone burial buildings, and they make for nice photographs.

Cusco, Peru, August 2, 2003 — We spent day 56 mostly running errands and preparing for our next 2 expeditions, first to the Peruvian jungle (the Manu Biosphere Reserve) and then on to Machu Picchu.  Along the way, we ran into some fun photo opportunities, including a women’s basketball game in an outdoor court with seating that resembled the terraced mountainside farms the Incas developed, as well as a mannequin with a gold grill.

The Sacred Valley, Peru, July 31, 2003 — After having spent the day before at travel agents to book our tour of Machu Picchu, we were somehow convinced that we should also take a bus tour of the Sacred Valley, a series of sites and towns around Cusco that have important Incan ruins, etc.  It turned out to be a decent way to see lots of places in one day and learn a little bit along the way from our very odd tour guide.  But it was mostly a way to get tourists to visit markets all over the region.  Clearly our inexpensive tour was subsidized by kickbacks or other “incentives”.  Since we weren’t really in a shopping mood, I focused much more on photography, with an emphasis on the the women who ran the markets dressed mostly in traditional clothing.

Cusco, Peru, July 30, 2003 — We arrived in the beautiful city of Cusco on Day 53 of our trip.  Cusco is a great little tourist town, and it’s the jumping off point for Machu Picchu and Peru’s Sacred Valley of amazing Incan ruins and other sites.

Back in 2003, digital photo technology was still new to me.  And it was hard to figure out what to do with all the photos I took when traveling around the world with only a bit more than 2gb in memory cards (plus a Mac Book).  Flash cards were not cheap then and things like cloud storage were non-existent (not that we had access to fast Internet much of the time).  Sometimes problems occurred.  Photos were burned to CDs (I don’t know if DVD burners were around then, but we certainly didn’t have one.) Then they were mailed to my brother Jeff for safe keeping.  Turns out some of those DVDs had corrupt files.  So, long story short, only two photos remain from Day 53 and one of those is a low res JPG.  Nevertheless, it’s the better shot of the two.

I present it here….Cusco’s main square, the Plaza de Armas and the Church of la Compana de Jesus: 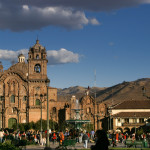 Lima, Peru, July 29, 2003 — Day 52 found me traveling to the outskirts of Lima with our Servas friend Pedro (careful readers will remember Pedro from day 49) to visit some newly unearthed Incan ruins. The ruins were nearly deserted, which was cool.  And Pedro proved to be an able guide since he was an architect who had spent time in Italy and Peru studying how to restore ancient buildings.  Nevertheless, I remember almost nothing about the ruins, not even its name.  Searching Google leads me to think we were at the Pachacamac ruins, but the pictures online are quite different, probably because in the past 10 years considerably more of the ruins have been excavated.  Regardless, my picture is nice enough, so that’s how I’ll remember the place.

For those wondering, Sherri chose to stay back at the hotel to write and take care of odds and ends. 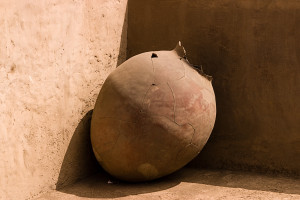